Just stepped on someone’s hand? What do you say? How do you apologize in Chinese? How to say sorry in Chinese? When in China, it’s important to know how to say sorry. It can get you out of awkward situations, like say, if someone starts yelling at you and you’re… well, not quite sure what they’re saying or why they’re mad. It’s amazing how saying sorry can (sometimes) immediately defuse a situation! So, think of “Sorry” as the magic word you need to know! Better yet, we’re going to show you 3 magic words to use to apologize in Chinese, so you can say sorry in Chinese when you step on someone or when you’ve just spilled this very angry-looking person’s drink…. 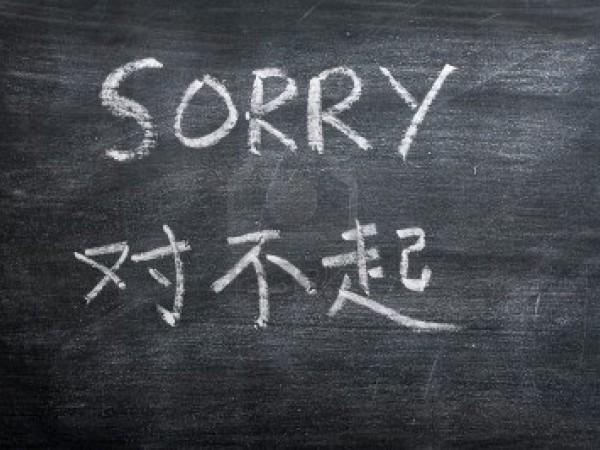 对不起 is a simple and straightforward word that people use to say sorry in Chinese.  As it can immediately defuse a situation, this is a great word to know! 对不起 means “unworthy”, and conveys a meaning of “I owe you”. As such, when you’re saying 对不起, you’re pretty much admitting your mistake directly and apologizing for it. So, in English, it is translated as ‘‘sorry”.

”对不起” is a classic apology that everyone uses. It can be used in most situations if you’ve made a mistake.
Do note though, that in some cases, 对不起 can be a strong word to use, and should only be used when you really want to emphasize your own mistakes and truly want to ask for forgiveness. For instance, you would seriously use 对不起 when you realize you’ve sent the wrong price to your client; and you’re going to need to re-confirm the price with him or her. That makes you really want to ask for forgiveness. UPDATE: Don’t use 对不起 for “light” things, such as asking for a favor, or asking someone for direction, “… 不好意思 (see #3) is much better for that kind of situations! 对不起 cannot be used where you would say “excuse me?” in English. Here are 4 examples where you should definitely be using 对不起. Example 1: You absentmindedly step on someone’s foot in the bus. You say:

Sorry I stepped on your foot.

Example 2: Your friend yelled at you because you dared to laugh when he walked straight into a glass door. Once the pain has subsided, your friend says:

I’m sorry. I shouldn’t have blown up at you.

Damn right, you shouldn’t have! It’s not even my fault.

Example 3: You bump into a table and your colleague’s brand new cup she brought back from New York crashes on the floor. You say:

I’m sorry that I broke your cup.

It’s all right. Don’t worry about it.

Example 4: The person you’re speaking to must hold the world record for fastest speech. You need him or her to repeat. You say:

I beg your pardon, could you repeat what you said? 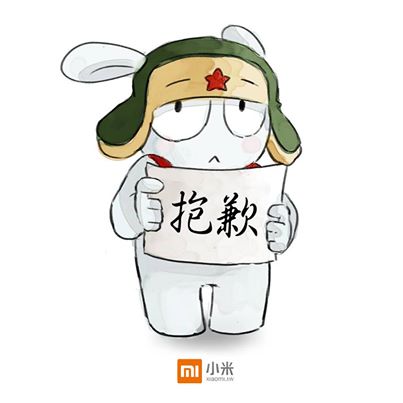 抱歉 (bào qiàn) is another way to say sorry in Chinese. 抱 (bào) means hold, 歉 (qiàn) means regret. There are two ways to translate 抱歉 in English. It can first mean: feeling sorry and guilty for an inconvenience that you caused. It can also mean regretting something that happened to someone.

”抱歉” is typically a word you’ll use to apologize for things you’ve done and feel bad about.
Here a few cases where you would use it: Example 1: You made an appointment with a colleague but had to reschedule, causing him to move his whole schedule around. You say:

I am so sorry to be bringing you so much trouble.

I’m sorry your dog passed away. 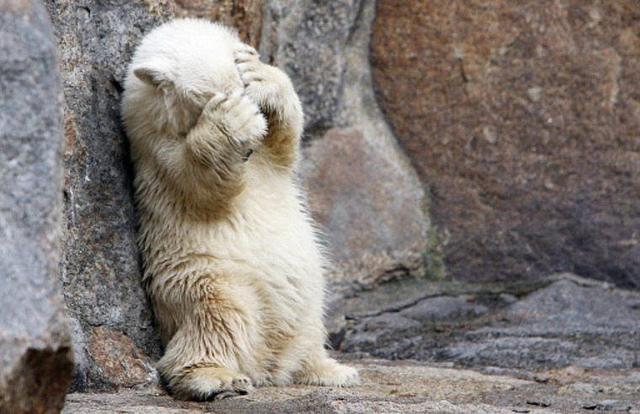 The little girl feels so shy when she meets strangers.

Now, however 不好意思 (bù hǎo yì si) is very often used as a more polite way to apologize. As a form of apology, it has 2 meanings. You can use it to say sorry in Chinese about things or situations that are not too important, but you still feel embarrassed about, such as being late or rejecting an invitation. Example 1: It took you forever to get to work because it was raining and all the taxis were full, and you had to take the metro instead (seriously this happens all the time in Shanghai). You say:

Another meaning of不好意思 (bù hǎo yì si) in English is “excuse me”. It’s a formal phrase that can be used to get someone’s attention when you need to ask something. Example 2: To make matters worse, you didn’t know where the subway station was. You ask:

Excuse me, could you tell me where the subway station is?

不好意思 can be used to say sorry in Chinese about things or situations that are not too important, but you still feel embarrassed about. It can also be used to get someone’s attention
Nowadays, people tend to use both 抱歉 and 不好意思 indiscriminately, because there are no big differences between the two words. As they are more like synonyms, people choose to use one or the other depending on their speaking habits. So pick your fave!

Use it for: Situations where you need to admit your mistake and move on. Add 请原谅我 (Qǐng yuánliàng wǒ) when you really slipped up and need to beg for forgiveness.

Use it when: you were a pain and you regret it; a service is temporarily out of order; something failed to do what it was supposed to; someone or an animal passed away, and many more situations.

So there you go! With these three magic words, you’re now all set to say sorry in Chinese if something occurs! Just don’t go getting into too much trouble on purpose to practice these new expressions! 🙂

UPDATE: Need more expressions to sound polite in Chinese, especially when you’re being a bother? Then check out part 2: Become an expert apologizer!