Yes is a very useful word to learn in any language. You use it to show you agree, to show your enthusiasm, to seal a deal and in many many different situations. As a Chinese learner, you were surely taught that while there is no direct equivalent to Yes in Chinese, 是 is an acceptable substitute. But there is more!

It is, as in this

But if you watch videos and movies in Chinese, you’ll soon come to realize that 是的 doesn’t always pop up in a “yes” situation and that there is a bunch of different ways to say yes in Mandarin Chinese. So why not try new expressions to say yes ? They will make you really sound like a native speaker.

In this article, you’re going to learn 7 easy yet useful ways to say Yes in Mandarin Chinese. These expressions are all very frequently used in everyday life so there’s no doubt that you’ll get to practice them a lot. Just get ready to say yes!

An easy and basic word to say yes in Chinese: 是

Let’s start with 是, the word with which you are likely the most familiar. And with reason too, as 是 is the most basic word in Chinese to say yes.

As an adjective, 是 means “right; correct” whether you’re sure about it or just think it might be correct. Nowadays, 是 is mostly used to check things, for example, to ask if somebody did something or to ascertain something.
For instance:

Need a quick confirmation? 是  is your guy. 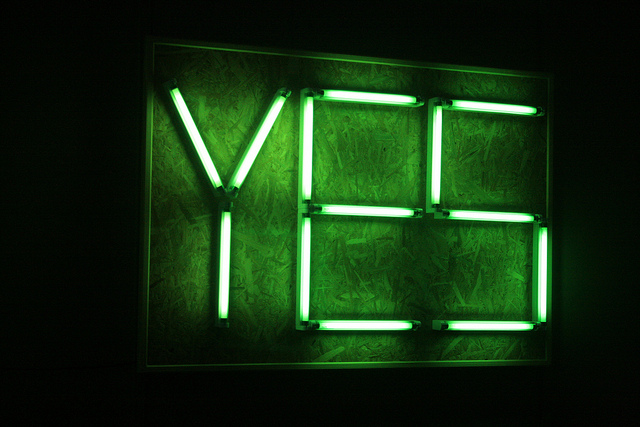 没错 méi cuò and 对 duì  are 2 expressions to use when you want to show someone they said something you agree with. 对 means « correct » in Chinese, so it is easy to understand why it can be used as a Yes. It’s very similar to « right » in English. 没错, if  translated word by word, means « not wrong ». As such, it is frequently used as a way to say “that’s right”.
In some cases, 没错 and 对 can be used instead of 是. For instance, in the example we used before, the expression « 是的 » can be replaced by 对 or by 没错, because in this case both 对 and 没错 mean the same thing as 是的. Why’s that?

Well, to help you understand the use of  没错 and 对 in this situation, just think of the question “Are you Mr. Lin ?” as the first question of a pop quiz ; to which you give the right answer (yes).
Let’s give 没错 and  对 a try:

In what other cases can we use 对 and 没错?

You’ll find yourself using 对 and 没错 a lot in conversations that contain an exchange of personal opinion (they happen).  In fact, as long as you agree with the other’s opinion, you can use 没错 and 对 all you want to show your approval. And since 对 and 没错 mean pretty much the same thing, the one you choose to use really just depends on your personal preferences.

It might help you become popular if you try to use more often 对 and 没错 (but of course for opinions that you really approve, we are not suggesting you be a hypocrite ^^), because people love to feel supported or approved.

When someone invites you out and you want to say yes: 行/好/可以

行: xíng; Ok 好: hǎo; great / good ”[zh kěyǐ; it’s ok. 行/好/可以 are all three very easy to use. All these word means Ok in Chinese and they have similar uses to “Ok, fine, good” in English.

They are mostly used when someone asks for a favor and you don’t mind helping, i.e in situations that contain a request.

As in the following examples: 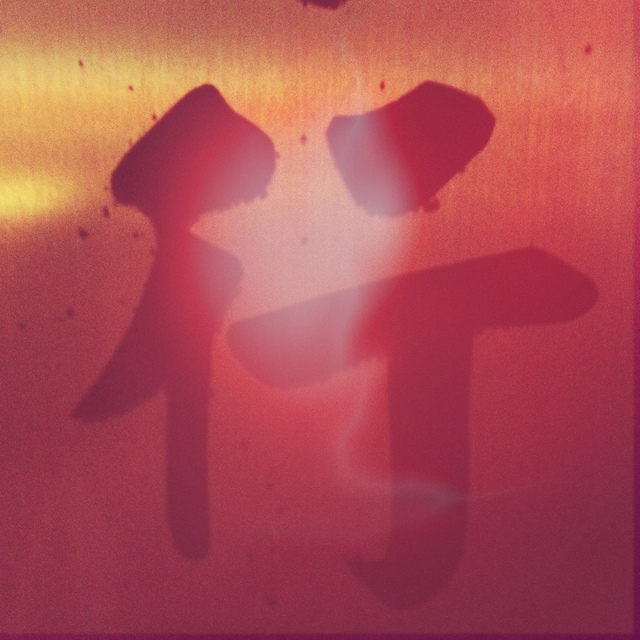 They can also be used when someone makes an offer you can’t resist. As here:

Just make sure you don’t use 好/行/可以 instead of 是/对/没错 because they don’t mean the same thing and can’t be used to replace each other in Chinese.

How come, you ask? Well, if someone comes and asks you if you are Mr. Ling, you’re not going to answer with “cool”, or “fine”,  are you? That’s going to sound weird and you will sound silly. Easy.

Use 行/好/可以 to accept your friend’s request or an invitation.

That way, you’ll sound friendly and adorable. Chinese people are usually happy to help others, so if you can show your gentle and helpful side to your Chinese friends, you’ll have a good reputation among them.

What should we say in other situations?

You might find that sometimes, in some conversations, the words that you’ve just learned won’t fit. That’s normal because you‘ll need to give an answer that corresponds to the question you’re being asked so that the conversation can go on smoothly.

But before you get all mad and turn the table over (think of your computer and of your cat sitting on your keyboard), here’s a smart way to say “yes” in all situations, that should come in handy.
Have you noticed that in every Chinese sentence, there is always a main word that holds the important information?

If you haven’t, let’s start with a few examples. The key word is in blue.

Did you see how people in these examples responded in a simple but really smart way? All you need to do is to repeat the key word in the question. Cool huh? Short and sweet. 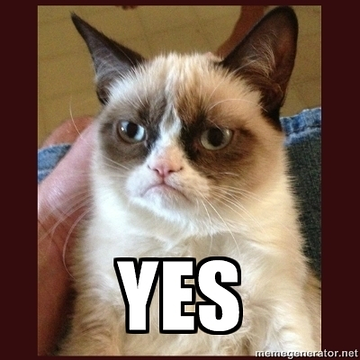 There can be different types of keywords in a sentence: a verb, a noun or an adjective, but once you’ve figured out what the keyword is, pounce on it and reuse it to answer the question. Before long, you’ll realize that you‘re able to have nice fluid conversations in Chinese.

When in doubt, repeat the key word in the question in the positive form and you’ll say “yes”.

After reading this article, you might be thinking “Dang, so many ways in Chinese to say yes! My 是 wasn’t that bad, after all”. And yes, they might seem like a lot but once you get used to them, they’ll become real simple vocabulary for you. Just watch Chinese TV shows and see how they say yes. Or go talk to native Chinese speakers to practice these new words in real life.
Don’t be shy, yell “yes” to everyone (or not, do listen to the question before yelling “yes”) and you’ll soon find that you’re comfortable with the many way yes in Chinese. 好吗？

Ninchanese combines addictive game mechanics, cute cats and efficient inese learning techniques to make learning Chinese a lot of fun! The app is now in beta so sign up now for early access to the beta! Check out our trailer and stay in touch with us on Facebook, Twitter, Google + and Weibo.