Mooncake folktale: A mooncake to rebel against the mongols

In honor of 中秋节 (Zhōng qiū jié), the Mid-Autumn Festival which falls each year on the 15th of the 8th lunar Month, this week’s Did you Know is all about 月饼 (yuè bǐng) mooncakes and the special mooncake folktale. Read on to learn the secret role mooncakes were said to have played in overthrowing the Mongols in Ancient China! 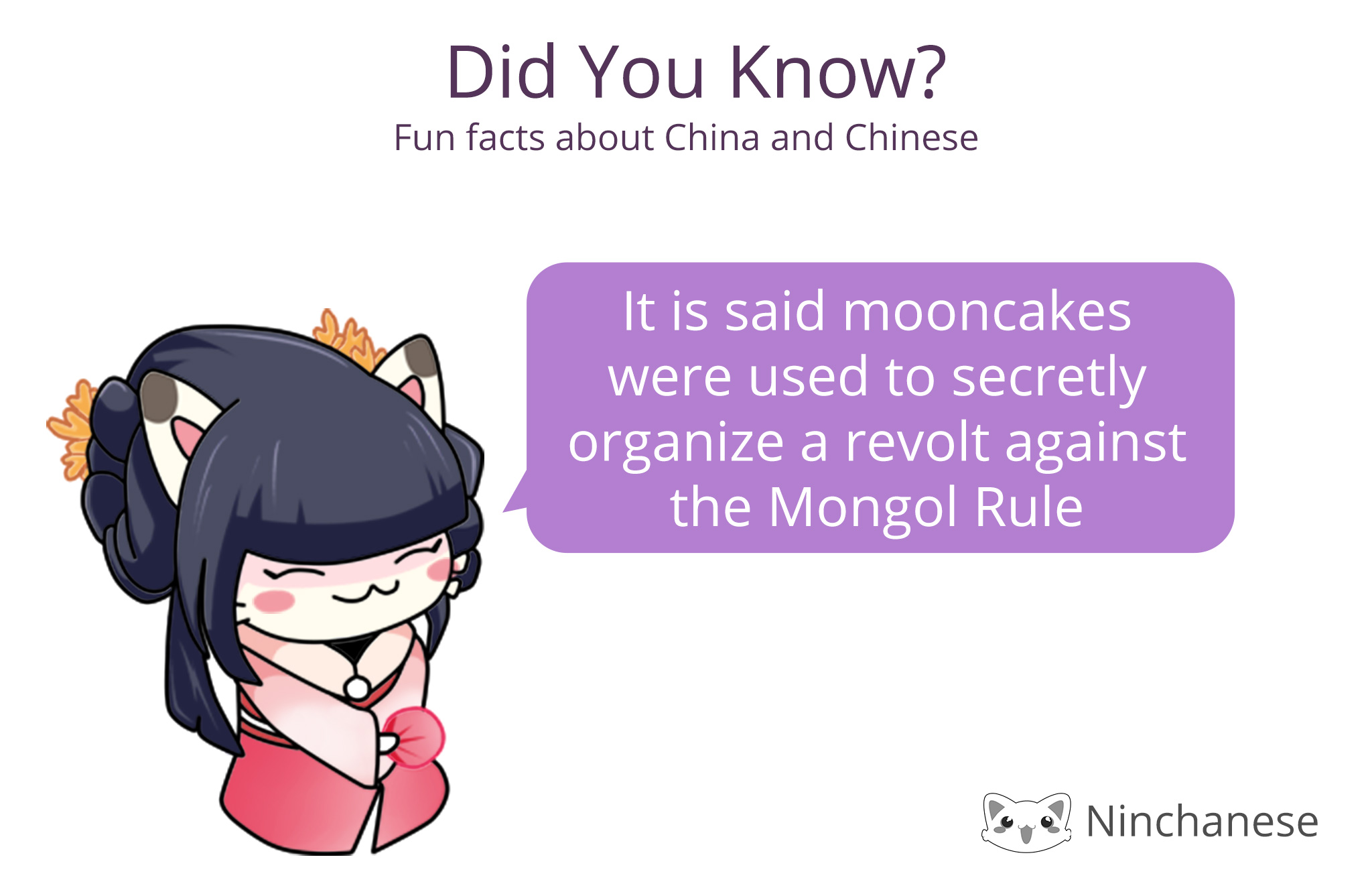 In China’s long history, there’s a persistent mooncake folktale that goes around: mooncakes played a special role and helped overthrow a ruling power. Did you know about this? Let’s explore this fun mooncake folktale.

Rebelling against the Mongols

Here’s the story, in a nutshell. First of all, it takes places during 元朝, the Yuan dynasty, which was ruled by Mongols  (1271 to 1368 AD). Towards the end of the dynasty, several Han generals decided to secretly organize a revolt. The Mongol rule was hard on the Chinese and they wanted to end it.

The generals were tightly watched by the Mongols so they had to find a clever way to spread a message to the population, unbeknownst to the Mongols. See, because of how strictly the Han Chinese were controlled, Han Chinese families weren’t all allowed to own knives. At the time, only one of 10 households was allowed to have a knife! As a result, sending a message to the whole population to gather as many weapons as possible was, therefore, essential to the revolt.

The mooncake folktale to save the Han Chinese

At that time, the Chinese already celebrated 中秋节, the Mid-Autumn festival. The festival, which first appeared during the Song dynasty (420 AD!) was already an important celebration in China. Therefore, the resourceful generals decided to use the Mid-Autumn festival to rebel. Hence, they choose mooncakes as a means to communicate with the population and communicate their desire to get rid of the Mongols.

Hence, they had special mooncakes made and then distributed them to the Chinese. These special mooncakes all contained a secret message. What did the message say? It seems like it was something along the lines of “On the 15th of the 8th lunar month, let’s all rebel!” How cunning!

Other versions of this folktale  say messages were probably printed on the surfaces of mooncakes and formed parts of a puzzle. To read the message, you had to assemble parts of the mooncakes to reveal the message. Since the message needed to stay secret, people would then eat the mooncakes.

We don’t know if these stories are true, but it’d be amazing if they were, wouldn’t you agree?