What to do when you can’t find the word you’re looking for with an IME? - Ninchanese 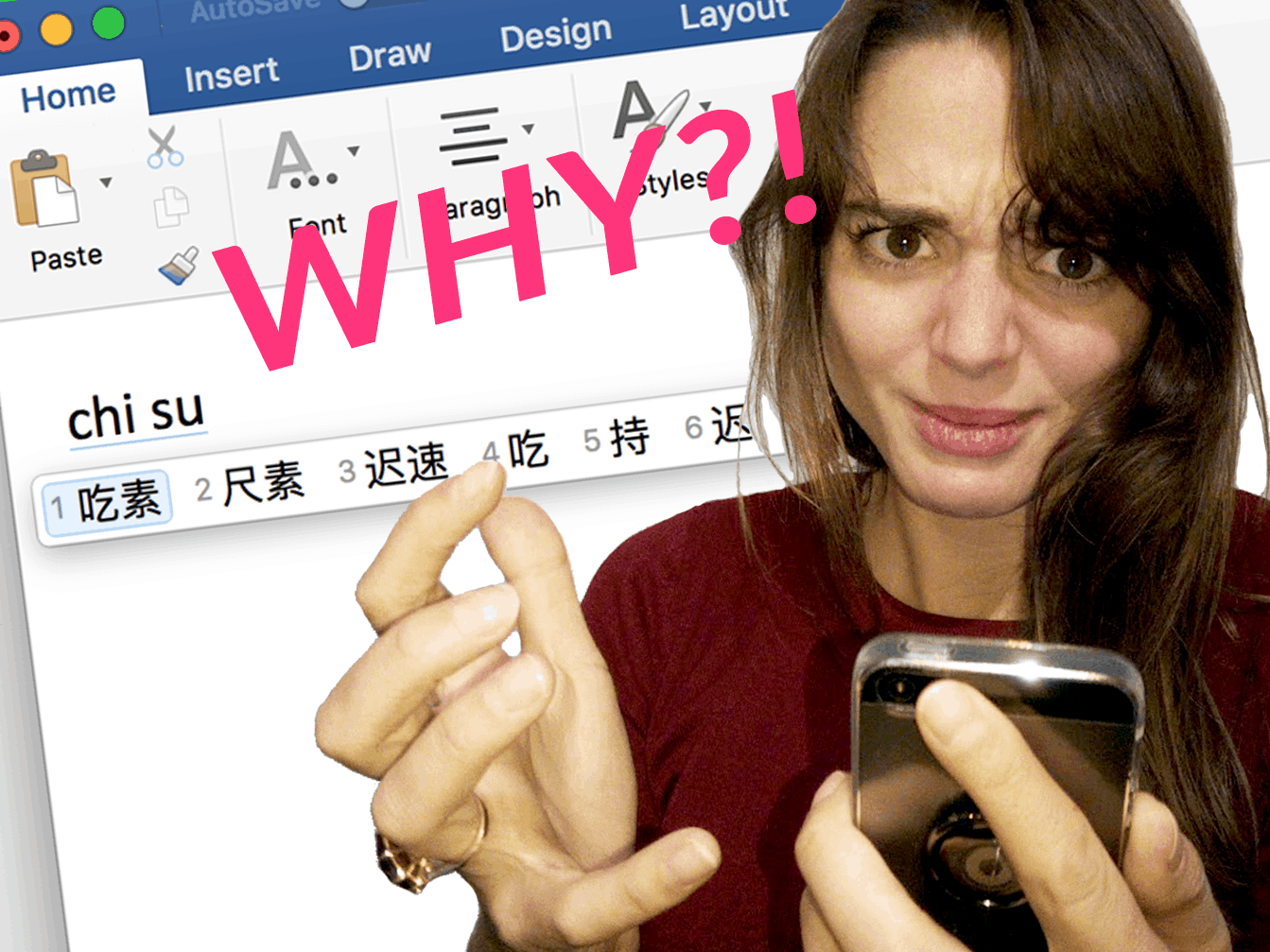 What to do when you can’t find the word you’re looking for with an IME?

Sometimes you think you know a Chinese word, but when you try to type it in your Chinese IME, you can’t find it. I’m sure this has happened multiple times to you. It could be for various reasons, maybe you don’t have the right pinyin. Or maybe there’s a spelling mistake in what you’re typing. How do you know?

How do you find the Chinese character you are looking for?

Today, we’ll show you tricks to study Chinese by using an IME. Using an IME is an excellent way to improve your Chinese and practice writing Chinese as the Chinese do.

Real fast: What’s an IME and how do you use one?

A Chinese IME is a Chinese “input method editor” which allows you to type Chinese characters easily like a native Chinese speaker, using Pinyin. They are kind of like a Chinese keyboard but with way more options than just 26 letters. Having an IME helps a lot with writing Chinese online and using it is a great way to progress in your Chinese. This is how you learn to write Chinese characters in the listening stage on Ninchanese.

No IME yet? Head here to see how to get one!

Because you use an IME to write in Chinese, it’s also a great tool to help you identify mistakes you may be making in the way you memorized some Chinese words. In particular, I see two points where using an IME can help you identify your mistakes:

Actually, IMEs are getting increasingly clever, to make your life easier. More and more of these Chinese input methods use predictive engines, kind of like autocorrect, to guess what you’re trying to say even if you don’t quite remember how to write the word you’re looking for.

The truth is, however, your IME sometimes won’t be that helping pal that does the thinking for you. It will just help you to know you’re wrong but won’t give you the word in Mandarin you’re looking for. So, in that case, what can you do to find the right character? What if there was a method that allowed you to find that correct Chinese character and at the same time train your Chinese to remember better the Chinese character you’ve mistakenly learned?

Let’s explore with an example

The other day, I wanted to write the word that means “Jealous” in Chinese. I typed “chisu” to bring it up in my IME, but nothing that looked right was coming up in the results.

Uh oh. Something’s wrong. No “to feel jealous” there.

Sure, I could have grabbed a Chinese dictionary and looked up the word “to feel jealous” in Chinese.

But I felt that was too easy. I was determined to understand why I wasn’t getting any results, in a way that would really help me memorize the Chinese word for “to feel jealous”. So I put my detective hat on and went on a mission to discover the culprit.

So here’s what I did.

My 吃 is correct; that I was sure of. So it must be the “su” that’s faulty.

Searching for the character Su

These results definitely don’t look like what I’m looking for.

Clinging to your Chinese memories

I take a few seconds to remember how the words I wanted to find looked. While I wasn’t quite sure about the second character –  or I could just have drawn it – I remembered the second character had the radical 酉 alcohol radical in it. So, I looked for characters with that radical or component in it, with my IME. Components are often either a sound or a meaning component so it could be a good path to find the character I was looking for.

After going through the first 5 results the IME suggested for “su”, and looking at other options, I found this character 酥  on the IME. Not quite the mental image I had in mind but worth a shot. Could that be the Su(e) I was desperately seeking (sorry, bad Madonna joke :D)?

So I looked that character up on my favorite Chinese dictionary, Ninchanese: 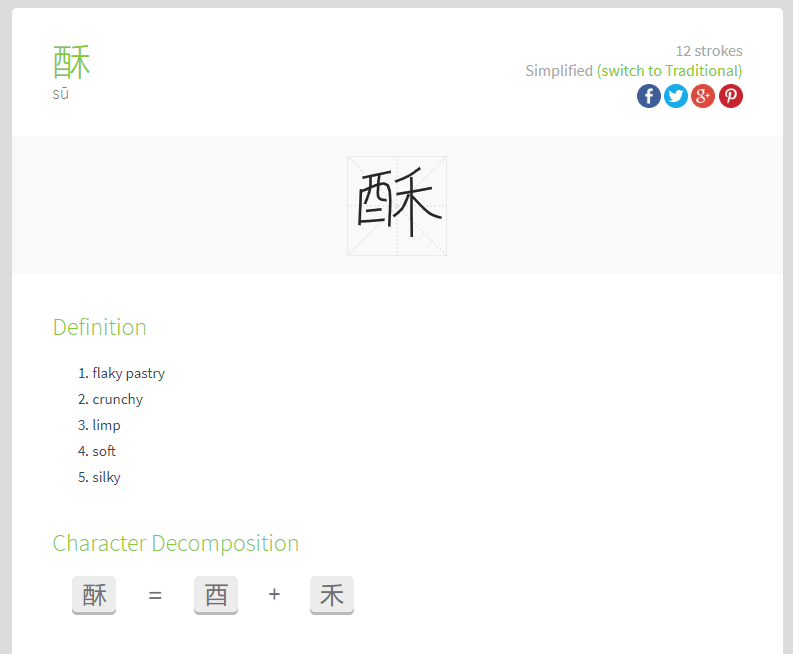 Oh. So it means “flaky pastry; crunchy; limp; soft; silky”. Not the one I was looking for.

Strangely evocative but not what I’m looking for.

So writing “su” alone without “chi” did not give me the result I wanted. But it did not refute the hypothesis that the word was containing “chi”, right?

This time around, it looks like my method trying to find the character I wanted using a key component and the pronunciation I thought was correct, was not helping to find the right character either. Either my “su” is wrong, and I’m seriously starting to think that’s the problem here, or I made up the presence of “酉“ as a component in it.

My “Su” lead obviously isn’t getting me anywhere. But, I know for sure the expression started with “吃”.

So I went online and typed 吃 in Ninchanese’s dictionary to see what kind of expressions contained 吃. It brought up these results: 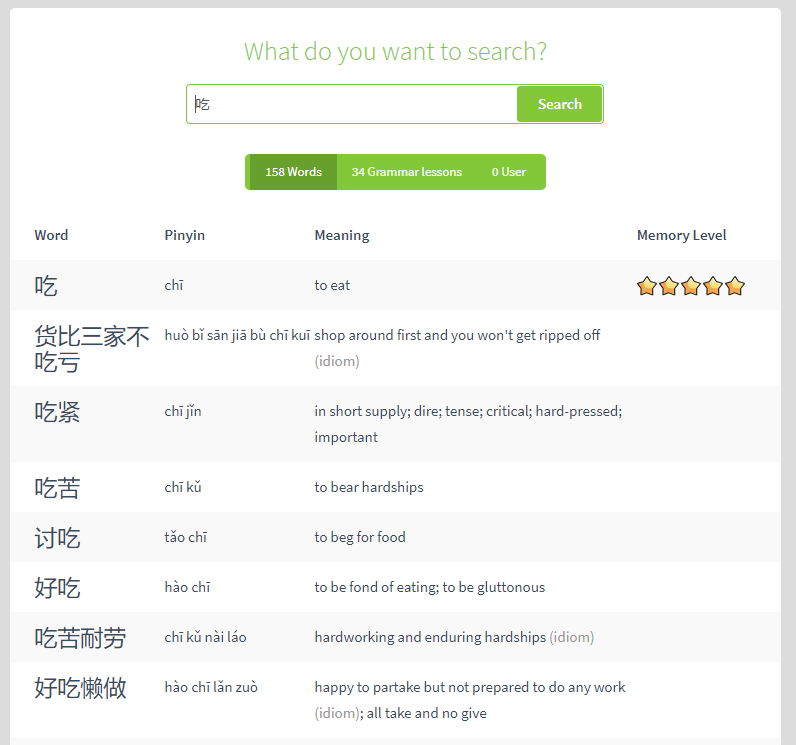 The 吃 I was looking for was first, so I clicked on it to see what kind of expressions contained 吃. Guess what? There’s a bunch – 128 related words! The Chinese sure to use their word “吃” to create other words! But it’s easy to look up all the related words that contain a Chinese character in Ninchanese’s dictionary results. Time to dig in and find “jealous”! 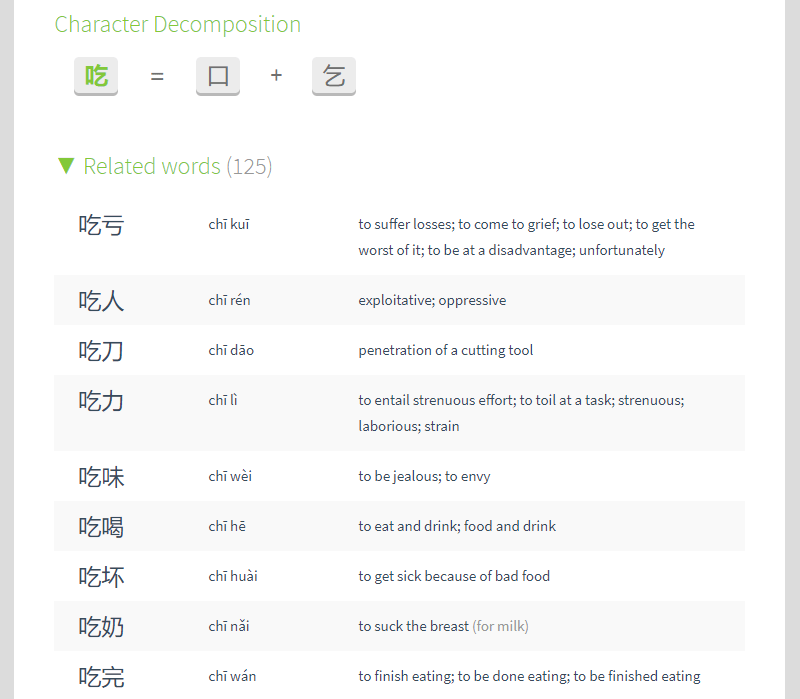 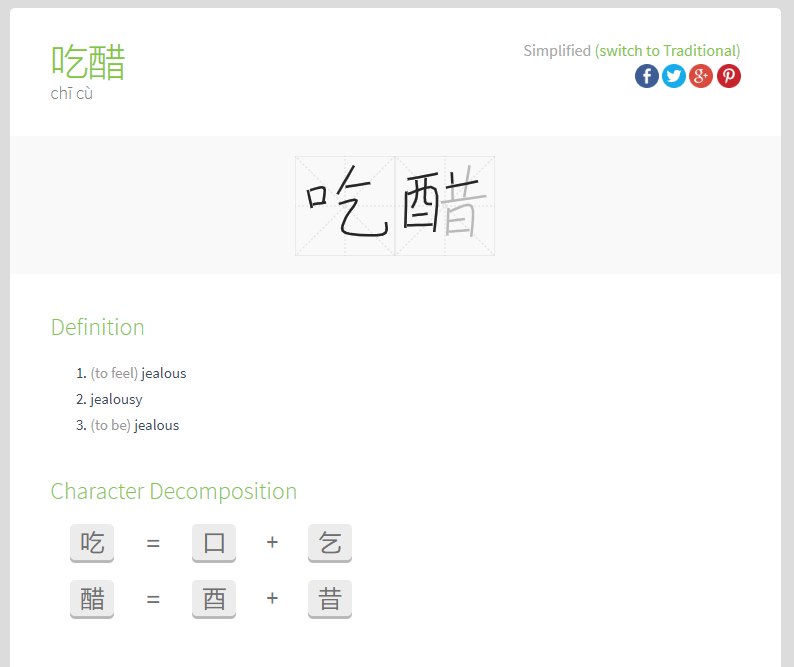 Here’s the culprit: 吃醋 Chīcù. Which means, literally, to consume vinegar. But people use it to say someone’s jealous. Because of love, naturally.

See? I knew it had 酉 the alcohol radical in it!  Turns out I wasn’t indeed typing the right pinyin. It should have been with a “c” ->  chī cù.  “Su” sounds a little close to “cu”, too. (Bad memory! Thank you, IME and Ninchanese.)

So there you go! You have learned Chinese a little on the side AND spot your mistakes in Chinese.

How about you? Has that happened to you before? If so, what kind of errors do you spot with your IME? Let us know if you have any other Nincha techniques with your IME!

6 ways to show your love in Chinese
Advanced, Chinese learning tips, Intermediate, Vocabulary chinese, learn Chinese, tips
NinchaneseWhat to do when you can’t find the word you’re looking for with an IME?10.30.2018
Share this post