The Chinese food and kitchen are very varied: there are in fact so many uncountable dishes that it would take a lifetime for you to try them all out! Learn the many ways of cooking and spicing up your Chinese meal you need to know about in this Chinese food course on Ninchanese.

As you progress in your exploration of Chinese cooking, you’ll certainly want to tempt your stomach with new Chinese dishes and tastes. What better way to learn more about this topic than in Chinese, the language you’re learning? Chinese Food is a perfect topic to explore deeper in Chinese: the knowledge you’re learning will prove directly useful to you.  (We’re not responsible for the extra pounds you may put on scarfing down new Chinese dishes:)

Read on to learn more about Chinese cooking, from its 8 key styles to the spices you definitely want to stock your pantry with! Once you’re done reading, guess what? You can learn all this yummy new lingo, little by little, in our new course on Ninchanese: Chinese Food. It’s right here!

When you can’t go out and have to cook at home, it’s always fun to add some exotic dishes. And let’s imagine you want to do some tasty Chinese home-cooking? What if you wish to experiment with a variety of Chinese ingredients and want to talk about them? And what happens if you need to buy spices, herbs, or other things to spice up your meal but don’t know how to express yourself? That’s what this article is about.

Or imagine another situation. You are standing in a Chinese supermarket (or just a market) and want to buy some specific ingredients. Wouldn’t it be quite a struggle when you don’t know the right words to describe these ingredients in Chinese? It could be anything from just not being a fan of a specific ingredient to being allergic to a spice.

The 4 Tastes and 8 big Kitchens

Let’s first start with a quick overview of the common big 8 Chinese culinary traditions in Chinese. If you’ve started exploring Chinese food and cooking, and by this, we mean real Chinese cuisine, not the stuff they try to pass on as Chinese food in Chinese “buffets”, you’ll quickly notice that there are different types of cooking in China.

Chinese cooking is divided into 8 big Kitchens, or schools, which were each named after the region they were developed in (e.g. 山东菜 – Shāndōng cài – Shandong cuisine). These styles were defined by the provinces in China and what each area could provide in terms of food. These schools also relate to each region’s history and economics. All these factors came together over time and refined the taste of the people and what they prefer for Chinese food. Of course, it doesn’t mean that you cannot get other food or only get this specific taste.

Chinese cooking is also all about the Four Tastes: Salty, Sour, Sweet, and Spicy. As you’ll see, the 8 big Kitchens of cooking in China all revolve around these Four tastes.  Also, Chinese dishes tend to be named very indescriptive, so sometimes, it‘s not quite clear what the ingredients are (e.g.  蚂蚁上树 – mǎ​yǐ​shàng​shù – Ants climbing a tree ). Like so:

Map of the 8 Chinese kitchen

This actually is the most common definition of the kitchens (and I would say more traditional). Of course, these 8 styles don’t cover all of China, so you may also find different maps which cover the whole of China and do a more detailed subdivision, possibly putting what I’m pointing out as the Southern kitchen, somewhere else. All that matters is that your stomach knows there are 8 different cooking styles in China to look forward to, and understands the differences between them!

The Chinese have a lot of different ways of preparing Chinese food and it’s good to know these techniques. True, when talking about preparing Chinese food, the most common thing to say it, whether in Chinese or in English, to make food rather than cook food ( 作饭 – ). So, why would you want to learn the words for them? The answer is simple, and it’ll make your tummy happy: a lot of Chinese dish names indicate the way the dish was prepared. So by learning how to say some of the most common cooking techniques, you’ll know a little more about what to expect when ordering Chinese food. Perfect for when you’re in the mood for a nice steamed bun (包子), or some 烤鸭 (kǎo yā – roast duck)!

As we saw, these are 8 major Cooking Styles (Kitchens) in China. So, depending on the region you’re in, you might see specific techniques all around you and others only quite rarely.  Out of experience, I can say that I see 红烧 (Braised in Soy sauce), 炒 (Chǎo – stir fry), and 炸 (Zhà) very frequently. It could also be that I’m not quite yet used to recognizing the other cooking-techniques immediately.

Bonus-tip: Look for the fire component under ( 灬 ) or left ( 火 ) of a character to understand that it may is related to a cooking-technique. If you are not yet familiar with radicals and components, it’s an excellent opportunity to start with the Radical Component World in the Ninchanese App.

You see, it can be quite helpful when looking at a Chinese menu (it’s common that they don’t include pictures) to know these cooking techniques and to use them to decrypt dishes’ names!

Spice up your meal

Alright, so let’s continue with the essentials of a meal: spices, herbs, oils, and sauces. Without these, a meal can be pretty bland, and personally, I prefer a good combination of spices and intense flavors but it can still be a struggle to name something else than just salt and pepper (maybe chili) without taking a look in the dictionary first.

The average joe just recognizes something because of experience, so in a supermarket, it mostly went like this. “I know this because I used it before or because I know it from my hometown, but I don’t know how to call it in Chinese.” And the version for the more adventurous people: That looks interesting; I’ll just buy and try it, without knowing what it exactly is or how it’s called. (Assumed not looking in the dictionary first).

The attentive reader would have figured out some basic structures here: If it’s a powder, just add a 粉 (fěn), for an oil a 油 (yóu) or if it’s a thick (soybean) sauce a 酱 (jiàng). Also, the word to add for grains is 粒 ( lì ) (and it’s also the classifier for those tiny grain/pill/pea-sized things). Still, in the case of the peppers, it’s not necessary to mention it, since that is the base form of them and don’t confuse it with seeds. These are called 籽 ( zǐ ).

It’s quite a big list, but no worries, just learn the things you want to know and use in your daily life. In my kitchen, I usually have the basic Soy Sauce, Rice vinegar, and 5-6 different spices from the list above, which is quite enough to make things more interesting. Adding a bit of this and that can even raise instant noodles to a king’s meal in case you are down for a quick snack and too lazy to heat up the kitchen.  As you can see in this picture below 🙂 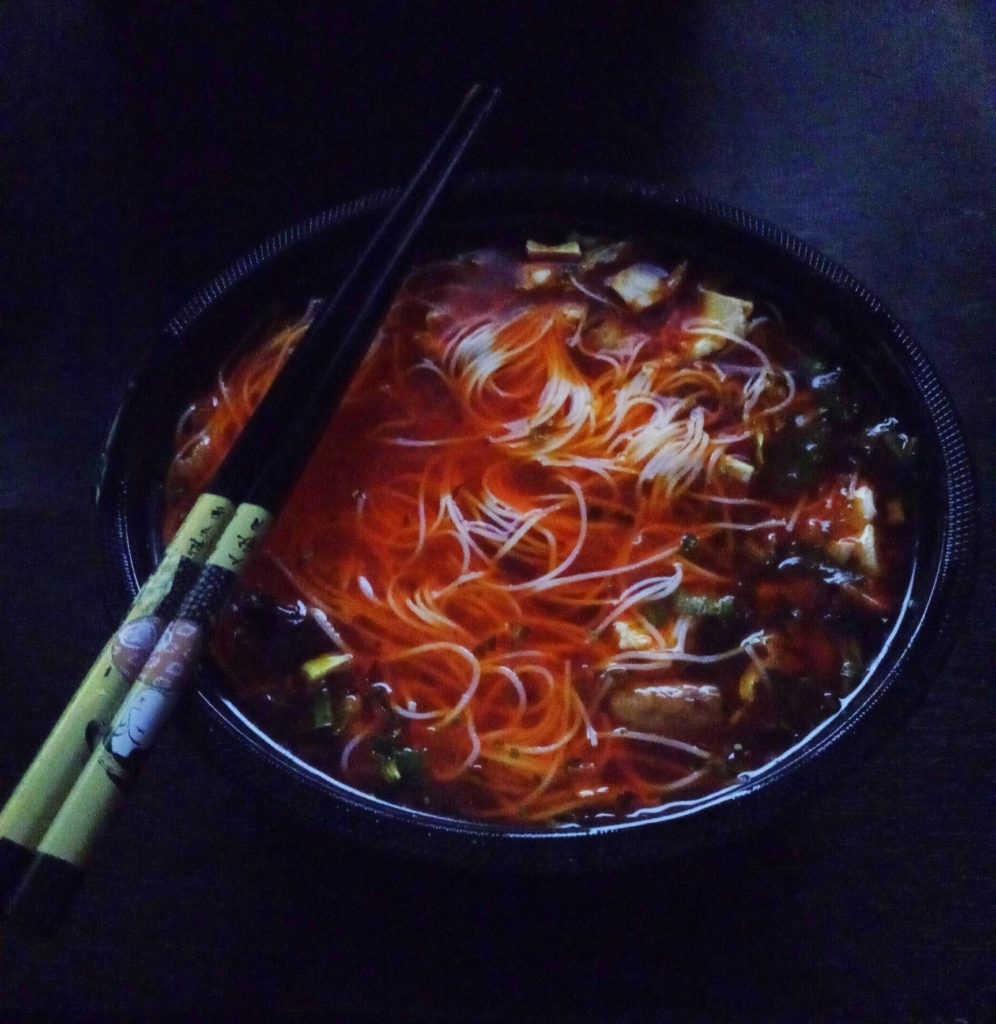 I once wanted to buy some ingredients to bake bread, but I neither learned the words in my regular Chinese classes nor learned them before somewhere else. What I wanted to buy was the pretty basic bread-ingredients: flour (面粉 – Miànfěn ), yeast (酵母 – jiàomǔ) and some olive-oil (橄榄油 – gǎnlǎn yóu). So I went to an employee in the supermarket and asked where I can find the oil since I couldn’t find it in the oil-section of the supermarket. The reaction was very typical: Confused look (due to perhaps, wrong pronunciation), then leading me to the shelf with the imported foreign noodle-sauces. After involving 2 more employees in that whole situation, they finally figured out what I wanted after I showed it to them in the dictionary. They eventually lead me the way to the shelf with the olive-oil (which is not that common and therefore quite pricey). Finding the yeast and flour was thank god not very complicated, only getting the right type of flour was. But that’s a topic for a future article about Chinese food. Stay tuned for that.

There are loads more topics to cover in the Chinese food corner, especially about other regional cuisines in China, but you know have the basics covered and I’ve shared with you what you need to get around and know what to expect when you are going out for a meal or traveling China for a culinary adventure.

As a home-cook, what we’ve seen today should already enhance your ability to have a bit more knowledge when it comes to speaking about making Chinese food. Especially about improving the taste and not getting lost in the wide variety of ingredients. Of course, there are a lot more spices and herbs you can learn, but the focus in this article is more on the basics and what you actually can buy in a common (super-)market in China. If you really love Chinese food and want to make your own, then I can’t stress enough to our Chinese Food course on Ninchanese.

Spices: Pixabay Monicore, all other pictures and tables were taken or created by myself (Product images in tables: Baidu, background images in 做饭的办法-banner: Baidu)