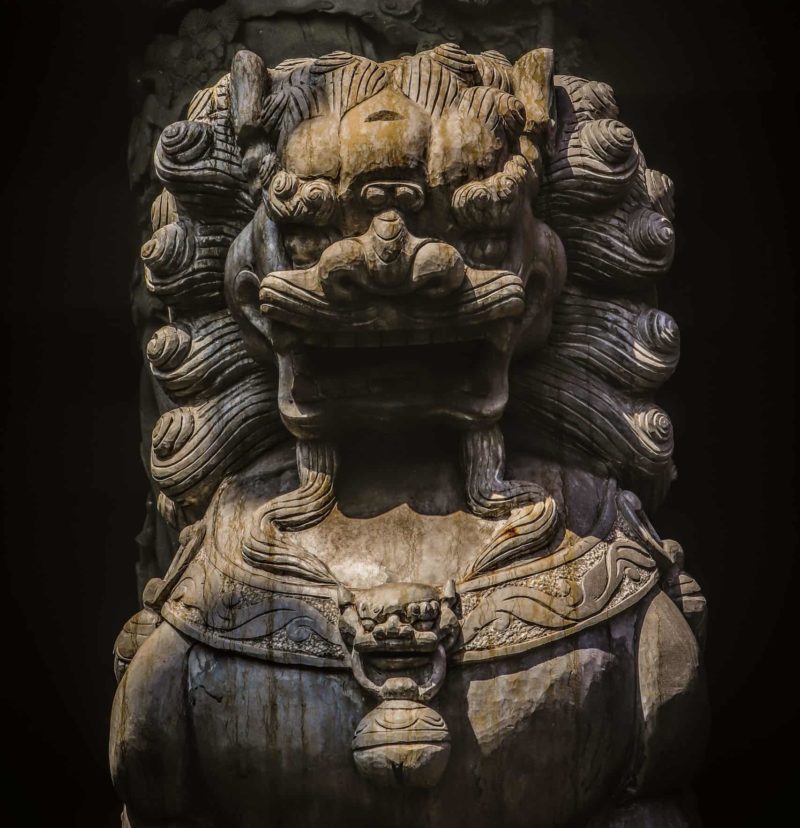 Did you know there’s a famous poem in Chinese composed of one sound and one sound only? What is this one-sound poem? How do you read a poem with only one sound? Welcome to the tale of the “Lion-Eating poet in the Stone Den”.

One of the most famous poems written in Classical Chinese is The “Lion-Eating Poet in the Stone Den”. It’s renowned for being composed of only one sound. One sound! The sound “shi”.

Is it a poem or a tongue-twister?

On the one hand, this text deserves to be called a poem. It still manages to use different characters and mean something!

On the other hand, as a one-sound poem, with lots of different tones, it also interestingly becomes quite the tongue twister.

When you’re learning Chinese, tongue twisters are always a challenge and a great way to practice your tones, so let’s explore this one!

A one-sound poem that makes sense… in writing

This short narrative poem is written in Classical Chinese.

What is Classical Chinese? Also called Literary Chinese, or 古文, Classical Chinese is the written form of Old Chinese. It was used for literature and all formal texts, from the 5th century BC to the 2nd century AD, end of the Han Dynasty. It actually continued being used as a literary language, for all formal writings, until the 20th century!

Since Classical Chinese is a written language, this poem makes a lot of sense in writing.

That’s because different Chinese characters compose it. More importantly, you have no trouble getting its meaning when you read it. That is if you’re somewhat familiar with Classical Chinese, which is a lot more condensed than modern Chinese.

Why did its composer write this poem as a “one sound poem”?

The poet behind this clever text wanted to make a linguistic demonstration. So, to create a fun tongue-twister of a poem with just one sound, he used the fact the Chinese language is full of homophones (i.e., words that sound the same but mean different things). When read in modern Mandarin, every syllable sounds the same: “shi”.

In other words: if you read this poem out loud, orally, it becomes challenging to understand.

In the same vein, if you try to read it in pinyin, you won’t be able to understand it either. That’s why it’s important to learn Chinese characters

As this poem is written in Classical Chinese, it’s good to know that it was composed using single characters rather than the double characters that are more commonly found in modern Chinese.

Let’s see the poem in pinyin now, just for fun.

Read the one-sound poem in pinyin

That made a lot of sense, right? I told you it was going to be fun!

What does this poem mean?

Okay, now, it’s time to prove that this one-sound poem actually means something! Here’s the translation of the Poem in English.

« The Lion-Eating Poet in the Stone Den »

In a stone den was a poet called Shi Shi, who was a lion addict and had resolved to eat ten lions.

He often went to the market to look for lions.

At ten o’clock, ten lions had just arrived at the market.

At that time, Shi had just arrived at the market.

He saw those ten lions and, using his trusty arrows, caused the ten lions to die.

He brought the corpses of the ten lions to the stone den.

The stone den was damp. So he asked his servants to wipe it.

After wiping the stone den, he tried to eat those ten lions.

When he ate, he realized that these ten lions were, in fact, ten stone lion corpses.

Try to explain this matter.

See? This poem is full of meaning! The poor poet thought he would eat, only to find stones instead!

Hear it read out loud

Ready to test yourself? Here’s what you can do:
1. Practice your Chinese pronunciation with the many dialogues and speaking stages on Ninchanese
2. Try reading this one-sound poem aloud and see how good your tones are!

With Ninchanese, you get a complete method to learn Chinese, which has you speaking, reading, writing, and more in Chinese. What’s more, whether you’re a beginner or an advanced learner, there’s content your level on Ninchanese and plenty more!

Start using Ninchanese on the web, with your computer or tablet, or on your phone with the Android app.